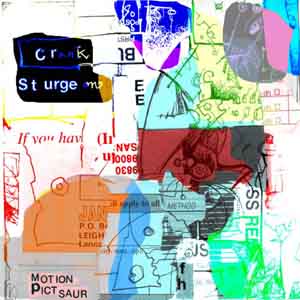 Reviewer: porkyhardkor - favoritefavoritefavorite - August 13, 2004
Subject: from Eldritch Palmer Zine #12
Basically, the recording is Crank Sturgeon's live performance at a campus radio station. The handicap of the spartan conditions for playing and recording was made up for with full freedom in putting the ideas into practice. Matt and his companions took advantage of the lack of constraints and gave vent to a deliberate, or not, concept of free noise. I hasten to warn you that that isn't tantamount with cacophony or any other uncoordinated actions of emotional exhibitionists. It's a lack of conventions or a plethora thereof, which after all means the same thing. 3 CD decks, 2 cassettes, 2 turntables, 1 DAT, 1 Minidisc, stereo auxiliary inputs, 1 reel to reel recorder all of these were crammed into two rooms, utilised with an artistic invention of the people athered there. The broadest definition able to cover the four tracks "Motion Pict Saur" contains could be 'sound collage'. That is most clearly seen in the first two pieces in which, owing to the freedom of the improvisation going on there, assorted sonics, subjected to arbitrary treatments, interacting with each other or existing separately, could be incorporated. There is enough room for actions that are more or less prearranged and also for the completely unpredictable, the last giving us a clue about where the title of the first track, "Mark de Manchester" comes from. Crank Sturgeon avoid prolonged themes; they prefer a 'shred method', that is short sounds plus fuzz. For the sake of those who are quick to label Crank Sturgeon as a noise outfit I hasten to say that "Motion..." doesn't bring much to prove that statement. What is more, with all its thicket of disharmonies, sonic uncleanness and improvisational disengagement and the playing time of about 70 minutes, the record is not a tiresome listen. In the last two tracks repetitions begin to come to the fore, subjecting the succeeding sound elements so that in its final moments the improvisational unconstraint mutates into a motile trancey sonic mass with subtle beats and swells of noise. To put it simply, a great record!
[krzysztof sadza]
Eldritch Palmer Zine
Reviewer: misterincredible - favoritefavoritefavoritefavorite - June 3, 2004
Subject: I love it
Beautifully chaotic, yet you can tell a lot of work went into this.